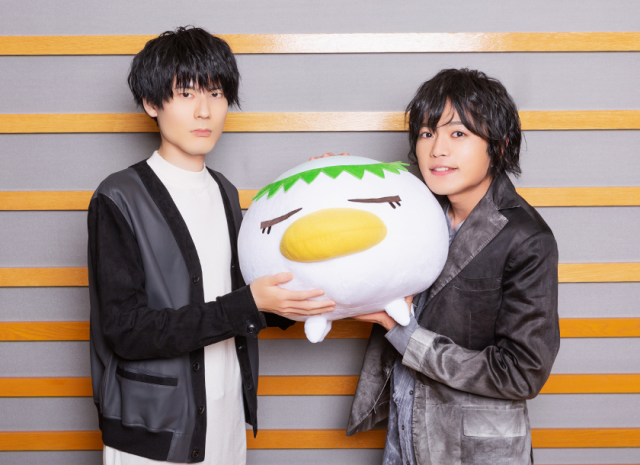 A short interview with 2/3rds of the main male cast of Ikuhara Kunihiko’s fascinating Sarazanmai. Uchiyama is as dour/sour as ever, so I’m always amused to see whoever’s (un)fortunate enough to be paired up with him…

We live in times when the demand for ‘seiyuu’ is increasing

When you think of Ikuhara works, you think of their unique settings, unpredictable storylines and inimitable worldviews.

Two of the show’s leads; Uchiyama Koki (Kuji Toi) and Horie Shun (Jinnai Enta), now have first-hand experience of what ‘Ikuharaisms’ are.

The two are working together for the first time on this series. We hear their honest thoughts on what they learned from watching each other in the studio, what they think of the present era where the demand for ‘seiyuu’ is increasing, and we even get to hear Uchiyama giving Horie life advice (!?).

Q: Had either of you watched any of Ikuhara-san’s works before?

Uchiyama: I hadn’t seen them, so Sarazanmai was my ‘first encounter’. When I read the script I found it very interesting but at the same time, there were parts that made me go ‘What the heck is this?’, plus many other elements that were intriguing.

Horie: I like Ikuhara-san’s works, having watched Utena, Penguindrum and Yurikuma Arashi. The impression that I got was that there were consistently difficult themes that run throughout his series; I was sure that Sarazamai would be the same and the auditions did indeed drive that point home.

Q: So you did audition for the series, right?

Horie: I auditioned for all 3 junior high school students. The audition didn’t involve any dialogue [with a partner] so I had to think about what sort of reactions each of the characters would have.

Uchiyama: Kuji Toi was the only one I auditioned for.

Horie: I was just glad to get the call to audition since I like Ikuhara-san’s works; even if I’d failed my audition I would’ve treated it as kind of like an audition for ‘commemoration’ – but I passed, so I was very happy when I heard the news.

Actually, I found out that I’d ‘passed’ from Murase (Ayumu, CV of Yasaka Kazuki)-san. I was working with him on some other show when he said to me ‘Let’s give our best for Sarazanmai’ and I was like ‘What!? Did I get picked!?’ (laughs)

Q: Did you face any difficulty during recordings?

Uchiyama: Nothing too extreme. That’s probably down to the fact that Director Ikuhara outlines his thoughts and the intent behind the story during the recordings for each episode.

Horie: There are instances where we see very Director Ikuhara-like cuts such as the ‘Dosukoi!’ parts spliced into the story, so it’s kind of hard to rely on reading the scripts alone. But Director Ikuhara will explain the details thoroughly every time so I just have to align my performance with his vision, which in a sense, is very easy to understand.

Uchiyama: He does take up quite a huge chunk of time before recording explaining everything. He might say something like ‘for this episode, we only know so much about this character so far, but certain things happened to him in the past that makes him who he is now’. So by the time we get to recording we’ve already gotten a pretty firm grasp on future developments, understood the background of the character as well as his thoughts.

Still, if there are things that the cast doesn’t understand then we’ll ask the Director ‘what does this mean?’, and that happened quite a lot.

Q: Recording was completed a year ago – what was the mood in the studio like?

Uchiyama: It didn’t necessarily feel like anyone was taking the lead; it was actually very calm, with a naturally pleasant atmosphere.

Horie: That’s right. It was Teiko-san (Azuma Sara)’s first voice acting work so she did bring a breath of fresh air to the sessions. I was a little nervous since there were a lot of senior seiyuu involved, but it was the type of studio where, once the recording tape was turned off, I could relax.

To be honest, I think the Director might’ve been the life of the party (laughs)

Uchiyama: Now that you mention it, I do feel that way too (laughs)

Horie: Also, the staff members would be bringing in sweets from Asakusa (the show is set in Asakusa) every week. Pudding or doughnuts or rice crackers. They were really tasty.

Q: One of the things that appeals about Director Ikuhara’s works is how you can’t tell what’s going to happen in the future solely based upon watching episodes 1 and 2. Do let us know some points we should look forward to that will enhance our enjoyment of the show.

Uchiyama: Each character has his own drama going on, and the complicated situations will gradually become clear. If you continue watching up until the end, the way you view the episodes will completely change from your initial impressions – even episode 1.

Horie: Your impressions of the characters will change by the episode. You’ll realize that scenes that just seemed to pass by in the first 1-2 episodes actually have key points hinting at the future hidden within them. Events that make you think ‘Oh really!?’ will continue to happen, and increasingly so.

‘Uchiyama-san laughs when he needs to laugh’, ‘Of course I laugh, I am human after all’

Q: The two of you worked together for the first time on this series – have your impressions of each other changed from what they were initially?

Horie: In terms of changing impressions…I discovered that Uchiyama-san laughs when he needs to laugh.

Uchiyama: Of course I laugh, I’m human after all (laughs)

Horie: I’d thought of you as this icy cool guy… (laughs)

Uchiyama: I’m not sure if you can call this a change in impression, but there was this once when 3 of us – Horie-san, Teiko-san and I, went for a curry after recordings. Oh wait, what sort of restaurant was it again?

Horie: Nepalese food! I think it was Teiko-san who invited us.

Uchiyama: Oh yeah. We had some free time after recording so we were like ‘let’s go’. Looked places up online and found a place that none of us had been to before, and we ordered curry with ‘normal’ spiciness level but you ended up sweating a ridiculous amount.

I’d never seen someone sweat so much before; it was like he’d just stepped out of the shower.

Horie: And he’s not speaking in metaphors either – it was, rather embarrassingly, quite true…(blushes)

Uchiyama: I was surprised by that.

Q: Do you think such shared experiences helped bridge the gap between the two of you?

Horie: Yeah. I do believe our hearts are less distant than before, or at least I would like to think it is so…

Uchiyama: That’s right. Thanks to seeing that amazing sweat…

Uchiyama: But of course it was my decision to go eat there so I do feel a bit of remorse over it… (laughs)

Q: What do you think of each other’s approach towards acting?

Horie: It’s quite embarrassing to say this in front of the man himself but…I had this impression that Uchiyama-san has a very stoic approach toward his work and I found out that my views were the same before and after meeting him. I thought it was amazing how he firmly understood his role and place within the work as a whole, and that he was able to perform accordingly.

Uchiyama: I don’t think I’m stoic at all; rather, I’m quite the laidback person.

Horie: There are things that you will be convinced of simply by watching his performance. Maybe it’s just me who feels that way, but your facial expressions (during recording) show that you’re not taking a haphazard approach to it at all.

Q: Uchiyama-san, what do you think of Horie-san’s approach towards acting?

Uchiyama: That he wasn’t a young boy messing around.

Horie: Not a lot of people like that around, y’know (laughs)

Uchiyama: True (laughs). We only worked together for 1 cour and I’ve not watched the finished product yet, so I probably haven’t grasped all of Horie-san’s abilities yet.

If you can stick with the things you’re bad at, a path will open up for you

Q: Recently, we’ve seen that a seiyuu’s range of work covers not only acting but also expands to singing and dancing.

Horie: I joined this industry when the requirements were already high, so for me it just seems like the norm.

Uchiyama: Industry conditions and the skills required will always change with the times, so the styles employed by people who entered the industry 5 years ago will be different from those who came in 10 years ago.

Q: Do you feel that you’ve been able to respond flexibly as the demands increase?

Uchiyama: My personal view is that people who want to conform will, and those who don’t want to, won’t.

Horie: Are you the type of person who can respond flexibly, Uchiyama-san?

Uchiyama: Nope, I can’t do it at all.

The sort of personality I have is one where if I overdo stuff, everything will just fall apart (for me). If I’m doing something I’ve never done before, I’ll just try my hand at it first and if I start to think ‘this isn’t going well’ then I become convinced that I won’t produce better results even if I keep trying – basically the paths available to me start to disappear from my mind. There isn’t much [in life] that I want to do, but I wouldn’t hesitate to put in effort to not have to do the things that I don’t want to do – I guess you could say that I possess a ‘process of elimination’ approach to life. Which is to say, I will avoid doing the things that I don’t want to do.

Q: Uchiyama-san, you mentioned in an earlier interview that your way of dealing with work involves ‘seeking not to persevere, nor to heap logic upon logic’.

Uchiyama: Everyone has things they’re good at and others things they’re not so good at – the basic idea is not to push yourself too hard and have a feel for only doing ‘things you think you can do (based on experience)’ and ‘things you could probably manage to do’.

Horie: I tend to start blaming myself whenever I fail at something… I’ll push myself, thinking ‘Why can’t you do it well?’. I’m still looking for a method to overcome that; it’s tough…

Uchiyama: Still, even if I don’t seem to be suited toward something, I’ve found that perseverance does seem to elevate my abilities and I can make that ‘something’ my own – it has happened quite often.

Uchiyama: Yeah. I never thought I could actually make money off doing voice work, for one thing – it really did just seem to happen at some point in time.

Q: Maybe it’s one of those things that’s come about as a result of the experience you’ve accumulated?

Uchiyama: I’d never consciously thought about amassing anything; it just somehow happened after years spent walking down this path. Even if I’d thought ‘Is this the right thing to do?’, the experience just naturally piled up over the years and I ended up gaining certain types of skills. There were things that I’d never wanted to do because I couldn’t do them well or I wasn’t suited toward them, that eventually turned into things ‘I don’t want to not do’.

So even if Horie-san thinks ‘Hmm’ about certain things right now, there’s always the possibility that you might see a path open up for you if you just stick at it for a while.

Horie: This has turned into a life counselling session. That really touched me. I saw a ray of light coming from Uchiyama-san’s words!

I blog radio drabbles too